The infamous “Baby Trump” balloon, symbol of extreme liberal butthurt, that has been seen worldwide at protests against President Donald Trump was slashed and deflated at an event held outside the Alabama-LSU football game in Tuscaloosa, Alabama on Saturday.

Hoyt Deau Hutchinson, 32, of Tuscaloosa was accused of cutting an 8-foot-long gash into the back of the giant inflatable likeness, which has an orange Trump wearing a diaper.

Hutchinson fled the scene after the attack. He was later arrested and charged with criminal mischief for damaging the $5,000 balloon. A GoFund me campaign was started to funds for his legal fees and has so far topped $15,000 $30,000, far surpassing its $6,000 goal. 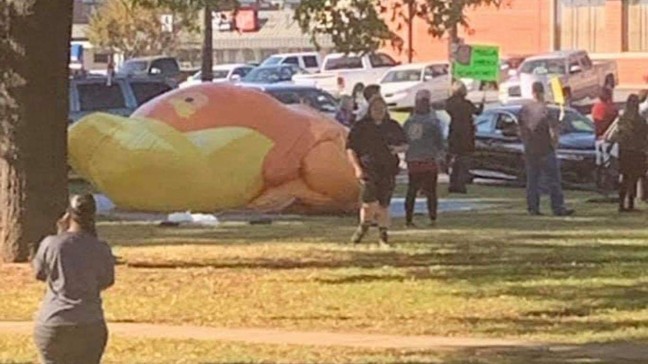 
that a coon ass name

Now, apparently for a few years he was an amateur boxer, leading me to suspect that there may be some mental impairment from taking one too many blows to the head.
If you listen to the guy talk, he makes meade skelton seem erudite. I think any criminal charge should be dropped due to his diminished mental capacity. Of course he'll have to pay for a new balloon, but the gofundme account he set up will more than cover that, leaving him with a nice tidy sum.
Options: Reply•Quote
Re: Trump Baby is Dead
Posted by: Drunk Trumptarders ()
Date: November 11, 2019 11:04PM
Hoyt Deau Hutchinson, 32, of Tuscaloosa

^That is a f'n funny ass name. No wonder he is so screwed up. We dig up all the info in this nutjob and post it.

Probably the first thing we will find is that "Hoyt" has a criminal history of alcohol and drug abuse.

As for the balloon, there are many of the balloons and you can buy them for around $500 off the internet.
Options: Reply•Quote
Re: Trump Baby is Dead
Posted by: He's going to be a felon now ()
Date: November 11, 2019 11:14PM
Hoyt is charged with a felony so he can't vote anymore in elections. What a fuck up.

His fiancee left him after 6 months. He went to Northside High School Counselor’s Connection; a school for retarded kids with emotional problems. He was later sent to a military school where he only lasted one year.

gerrymanderer2 (OP) posts several lies on ffu daily - many\.10think he's a fx co gov worker who is getting paid to do it for false DNC democrat "advertising". he floods ffu with useless posts to bump down major news, posts fecal matter, mutilated bodies, child porn, foreign drug ads and sneaker ads, tells people to kill themselves and government should seize them and put them on psych pills in prison - decided by democrat gov of course, promotes kangaroo courthouse trials, gives anti-religious rants, gives satanic ritual rants, posts black males with large dicks on white young females, portends white low birth rate and fall of USA, food tampering/poisoning, and anything possible to DEMORALIZE white people on ffu. (perhaps a chinese prisoner or isis member - but definitely knowledgeable of fx co gov from the inside at times). the website operator has told him "not to post or return" which are still posted - not removed, by the sysop: not because of a political leaning but for continual illegal and gross spam along with messages that are only to demoralize if not kill others. he/she plays at financial terrorism as well: continuall reporting false financial data, and fake emergency please from (fake members of the community he makes up)

GO BACK TO HELL G2

AND THEY ARREST THIS GUY FOR SLITTING AN OFFENSIVE BALLOON? USE WEAPONS TO INSURE HE CAN'T GET AWAY

Options: Reply•Quote
Re: Trump Baby is Dead
Posted by: depends onhis record, & the jury ()
Date: November 12, 2019 11:35PM
An Alabama jury may slap him on the wrist. Of course, he still gets to pay for a new balloon.

I haven't heard whether he has a previous criminal record to complicate things. If he did, we probably would have heard all about it by now.
Options: Reply•Quote
Re: Trump Baby is Dead
Posted by: byb bye baby ()
Date: November 12, 2019 11:39PM
It's past it's prime now anyway. Why has no one flown a drone into that thing and cut the lines to let it fly away?
Options: Reply•Quote
Re: Trump Baby is Dead
Posted by: I was wondering that ()
Date: November 12, 2019 11:41PM
I thought it would be kind of cool if it got loose, either by malfeasance or by deliberate action of its handlers, and floated along for days or weeks. There would be web sites devoted to tracking the trump balloon.
Options: Reply•Quote