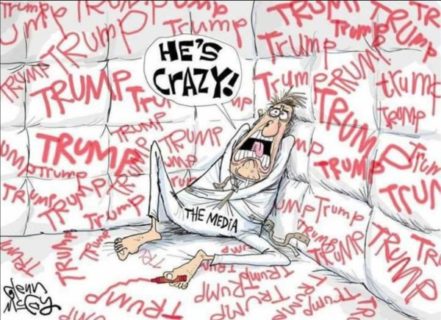 Options: Reply•Quote
Re: libtards are blaming 9/11 on Trump
Posted by: the trumptard’s hero ()
Date: September 11, 2019 07:23AM
I remember Trump getting interviewed a few hours after the World Trade Center collapse, one of his first comments was that a building he owned was now the tallest in lower Manhattan.

That’s a pretty odd thing to say hours after thousands of people were killed. But in true Trump fashion, it also wasn’t true either.


It was broadcast live on TV, WWOR in New Jersey. And Trump has commented on it since then, defending himself.

So much for that “fake story”....
Options: Reply•Quote
Re: libtards are blaming 9/11 on Trump
Posted by: Best President Evah! ()
Date: September 11, 2019 08:04AM
In his book "The America We Deserve", Trump wrote, ""I really am convinced we're in danger of the sort of terrorist attacks that will make the (1993) bombing of the Trade Center look like kids playing with firecrackers. No sensible analyst rejects this possibility, and plenty of them, like me, are not wondering if but when it will happen."

Trump came down to the World Trade Center as soon as they allowed non-first-responders to enter the site with hundreds of construction workers that he was paying to work on another project to help. He paid for that with his own money.

> Fake video. And even if this was remotely true, he
> would have attempted to bill New York and stiffed
> the construction crew.
> Go figure.

No, that’s just Trump making a TV appearance near ground zero. It doesn’t show “his workers”, it’s him just referring to “his workers”. Just like he says Mexico’s paying for the wall, healthcare will be better and a fraction of the cost, and the hurricane’s going to Alabama.

Options: Reply•Quote
Re: libtards are blaming 9/11 on Trump
Posted by: Antiasshat ()
Date: September 11, 2019 09:08PM
Liberals blame Trump for everything. Rain, hurricane, floods, blizzards, erectile dysfunction, cancer, male pattern baldness, global warming, saggy titties and halitosis. Who cares what they think? And even if half of it’s true it could be worse. MUCH worse.
Attachments:

He’s been questioned numerous times about it and never even offers anything to substantiate it, like provide a name of somebody from the fire dept or police that he helped coordinate this with. I’m guessing he just went down there to get his face on tv, floated the idea of having the mighty trump workforce come to the rescue, and was ignored, or thanked then asked to leave.

It was global warming that contributed to the collapse of 3 buildings, not the people who hate and kill Americans
Options: Reply•Quote
Re: libtards are blaming 9/11 on Trump
Posted by: Trump at Ground Zero ()
Date: September 12, 2019 07:37AM
He was definitely there. Rudy Guiliani was pretty active on the ground also.
Attachments:

> It was global warming that contributed to the
> collapse of 3 buildings, not the people who hate
> and kill Americans


Because your an uninformed douchebag who needs all your 'news' spoon-fed to your sorry piece of shit asshole self from the lying libfags at CNN. Trump was down at ground zero 2 days after the those wacky airplanes decided to attack the world trade buildings and pentagon. Faggot!
Options: Reply•Quote
Re: libtards are blaming 9/11 on Trump
Posted by: Leftist.Gorilla ()
Date: September 12, 2019 10:28PM
.
Attachments:


Posting nonsensical meme's rather than engaging in conversation.