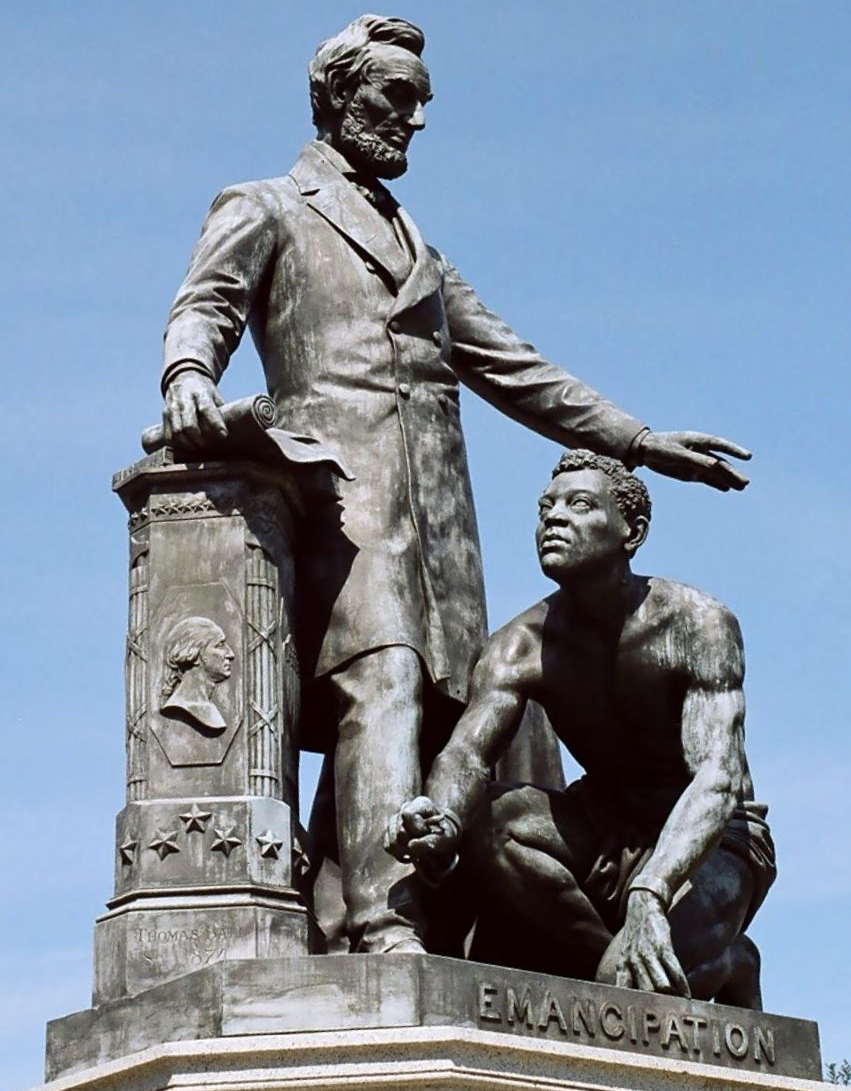 In grateful memory of Abraham Lincoln, this monument was erected by the Western Sanitary Commission of Saint Louis MO: With funds contributed solely by emancipated citizens of the United States, declared free by his proclamation, January 1st A.D. 1863. The first contribution of five dollars was made by Charlotte Scott, a freed woman of Virginia, being her first earnings in freedom and consecrated by her succession and request on the day she heard of President Lincoln’s death to build a monument to his memory.

So, just to make it absolutely clear: The statue in question here owes its existence not to “rich white people,” but to newly freed slaves, the first of whom contributed to it her first-ever earnings as a free citizen of the United States. To tear it down would be a grave insult to the memory of those who created it.

It was a poor, recently freed enslaved woman, Charlotte Scott, who, distraught over Lincoln’s assassination in 1865, declared, “Colored people had lost their best friend on earth … I will give five dollars of my wages towards erecting a monument to his memory.”

Scott’s request and contribution to the Western Sanitary Society, a charity run by white abolitionists for freedmen and Union veterans, grew as black Union veterans and freedmen exclusively gave thousands more to the project.

The society described the exuberance: “In the fullness of their hearts the colored soldiers would push out their last ‘greenback,’ saying, ‘Take it all.’”

So, contrary to claims that African Americans had little involvement, they, and especially black Union veterans, led the charge to see Lincoln immortalized in the park.

White abolitionist preacher Rev. William Greenleaf Eliot was determined to realize the project and found a white American sculptor, Thomas Ball, who had a sculpture model of Lincoln that Eliot noticed.

What changes do you hope will come out of protests and debates about police and race? Write to The Post.

Ball donated his services of turning the sculpture into a full-size bronze at cost, so the freedmen’s funds were sufficient. But Eliot insisted the original design be altered. He wanted the freed slave to be an eager participant in his own liberation, and the shackles were made broken to represent the end of bondage.

Additionally, Eliot wanted it to depict the likeness of man he admired, a former enslaved person and friend of his named Archer Alexander. Eliot wrote a biography of Alexander and said of him, “I never knew a man, white or black, more thoroughly Christian … in all conduct and demeanor.”

Alexander is the freed man coming up from bondage. And if observers look closely, they recognize Alexander’s position is active, face turned upward. He is not kneeling but crouched, with one knee up, another tucked below, his right hand clenched in a fist.

Congress appropriated the funds for the pedestal to finish the project.

Filmmaker Ken Burns reflects on James Baldwin's understanding of liberty, and how our most venerated monuments can remind us of where America falls short. (The Washington Post)
At the later dedication of a replica in Boston, the day’s program described the sculpture’s intent: “In the original the kneeling slave is represented as perfectly passive, receiving the boon of freedom from the hand of the great liberator. But the artist has justly changed all this … by making the emancipated slave an agent in his own deliverance. He is represented as exerting his own strength, with strained muscles, in breaking the chain which had bound him.”

On the day the statue was unveiled, a crowd of 25,000 gathered, black and white. Supreme Court justices, Cabinet officials and the president shared the park and the day with freedmen.

And the great thinker and orator Fredrick Douglass dedicated the statue in a blistering and beautiful reflection on Abraham Lincoln. Douglass castigated Lincoln fiercely yet praised him mightily. And with remarks clearly targeting officials in attendance, he savaged the backsliding on race in the United States in the years since the Civil War’s promised equality.

Holmes Norton and other critics claim without strong evidence that Douglass criticized the statue’s design in his remarks, but there’s scant evidence for such. No contemporary account or documents produced by Douglass reflect this, and his public critique of Lincoln in front of the adoring crowd was otherwise unsparing.

The only “proof” that Douglass disapproved is a reprinted letter by a witness, paraphrasing Douglass four decades later, to a critic of the monument. It is hearsay, at best.

More than 350,000 Union soldiers died in the Civil War, 40,000 of them from Colored Troops regiments. Holmes Norton is right that black Americans were active agents in their own liberation and deserve recognition of their bravery and sacrifice. But that does not require diminishing the sacrifices of others who fought, were wounded and killed in pursuit of an America free from the scourge of slavery.

The history of the statue does not relieve us of our obligation to look upon it and its meaning critically, but it does require us to view it with complexity. The statue itself reflects the fraught relationship America had and continues to have with race. However, destroying the Freedmen’s Memorial does not change the past.

Douglass was modest in describing the monument he dedicated. He contrasted it with the great monuments he expected other Americans to spearhead, calling it “the humble offering we this day unveil to view.” But he was grand in his vision of what it would come to mean:

When now it shall be said that the colored man is soulless, that he has no appreciation of benefits or benefactors; when the foul reproach of ingratitude is hurled at us, and it is attempted to scourge us beyond the range of human brotherhood, we may calmly point to the monument we have this day erected to the memory of Abraham Lincoln.

The Emancipation Memorial should symbolize all that Douglass hoped it would. It should be a place where the weight of history bears down upon us. It can be a place for righteous anger, for honest examination of American injustice. But it must not be a place for satisfying the formless rage of the mob, the spirit that seeks destruction and shouts down dissent. The ignorance and nihilism of those who would tear the statue down dishonor the freed slaves who created it and are remembered by it, the man who dedicated it, and the president who freed them. It deserves to stand forever, a silent monument whose history and character speak louder than anyone who would destroy it.

So many well off young whites wearing " Humanity" T shirts that mean nothing , Go to Africa and work with the native people as their equal to better their lives will you

Seriously, that's the best you could come up with???? Where you playing with your little pee-pee while typing it????

So you are comparing a statue of the head of government during a time people decided to break away; to a statue of a President that died 155 years ago. You are a special kind of stupid, aren't you. Must be a Democrat.
Options: Reply•Quote