Welcome to Fairfax Underground, a project site designed to improve communication among residents of Fairfax County, VA. Feel free to post anything Northern Virginia residents would find interesting.
Goto Topic: Previous•Next
Go to: Forum List•Back to Forum•Post New Topic•Search•Log In•Print View
Chelsea Clinton made $9 million while serving as a board member for the IAC/InterActiveCorp since 2011
Posted by: The Clinton "working class" lies ()
Date: January 07, 2020 12:50PM 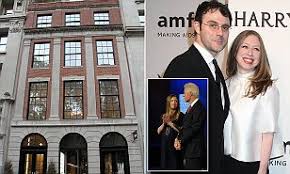 Options: Reply•Quote
Re: Chelsea Clinton made $9 million while serving as a board member for the IAC/InterActiveCorp since 2011
Posted by: badly loaded funds ()
Date: January 07, 2020 12:53PM

While this was going on, much else was pushed to the outer fringes of the news cycle. North and South Carolina still wading hip-deep in polluted and hog waste-infested floodwaters of the latest climate change-driven hurricane. Refugee families seeking asylum in the United States piling up in detention centers, with some launching a hunger strike, and children shipped to desert concentration camps. The United States preparing new “crippling sanctions” on Iran, including attempting to reduce its oil sales to zero – a step going right up to the line of an act of war that could consume much of the Middle East. American bombs supplied to Saudi Arabia incinerating the nation of Yemen—and U.S. action deliberately setting out to reduce Gaza and Palestinian refugees to the point of starvation.

On the positive side, world leaders assembled at the United Nations broke out laughing at Donald Trump as he boasted of “my administration’s” brilliant accomplishments. But all this and more was blacked out as the Senate Judiciary Committee moved to complete the longterm Republican agenda of stacking the Supreme Court with a far-right majority.

There is much handwringing in the media and cable TV punditocracy over the “toxic” condition of American politics revealed by the Kavanaugh confirmation process. “Toxic”? You really think? Behold the least popular Supreme Court nominee in memory, appointed by the most unpopular and corrupt U.S. president in modern history, finally confirmed by a Senate that’s one of the least representative bodies in any more-or-less democratic country in the world. And ponder the sick joke of the five-day “investigation,” crafted to give some cover to Senator Jeff Flake and tailored by Donald Trump’s instructions to the FBI to make sure it would find nothing.

It’s important to say something here about Dr. Christine Blasey Ford. Not only a survivor of sexual assault, she stands out most as an example of the kind of people who never intended, but at the critical social moment step forward, to become the heroes they had never imagined – people like Anita Hill, Chelsea Manning or Edward Snowden, or Daniel Ellsberg in an earlier generation. Dr. Ford needs to be honored and above all, protected against the vilification and threatened violence that will come her way.

Donald Trump for his part got it right: Kavanaugh “showed America exactly why I nominated him.” That hits the nail on the head. Kavanaugh embodies those qualities of male entitlement, affluent privilege, snarling denial of responsibility—and above all, willingness to trample on the rights of those without power – that Trump most admires and the right wing treasures. And the molester-in-chief’s accidental presidency, along with razor-thin Republican control of the Senate that may vanish in 2018 or 2020, made this their moment that might not come again.

They’re dreaming not only of further crippling, if not overturning, the 46-year-old Roe v. Wade decision but maybe marriage equality too, even at the risk that it might destroy the legitimacy of the Supreme Court (not an altogether bad thing in the circumstances) – and killing the Affordable Care Act as well. As a lower court judge, his most obscene rulings like denying a 17-year-old detained asylum seeker an abortion could be overruled. As a Supreme Court Justice, his opinions won’t be subject to appeal.

What did the grotesque September 27 hearing actually show Kavanaugh to be? A youthful sloppy drunk, jock and pretty clearly an entitled abuser of young women, by his mid-thirties or so he had dried out, cleaned up and pursued his legal career with all the elite connections to get on a powerful circuit court and pursue the ultimate Supreme Court appointment he always dreamed would be his.

Nothing was going to get in the way of that destiny – not his lurid obsessions with Bill Clinton’s sexual conduct while he worked in Kenneth Starr’s investigation; not the massive trove of his emails under the George W. Bush administration helpfully concealed by “executive privilege” and most certainly, not some long-ago recreational sexual attempt so unimportant that it wasn’t worth remembering. The decades-long traumatic impact on the survivor, who could never forget, was no concern of his. No wonder he was righteously outraged that it would come up on the eve of his crowning glory.

Polarization is Necessary!
In the wake of this outrage, many people may feel that all the mobilizations and outpouring of the #MeToo movement and its allies are ultimately of no use. If the Kavanaugh confirmation couldn’t be blocked by the heroism of Dr. Ford, the evidence of Kavanaugh’s lies, and the huge show of opposition, is there any point of being in the streets when the rich and powerful pay no attention?

We disagree. That resistance has ensured that Christine Blasey Ford and the other brave women coming forward don’t feel alone. There will be more exposures and, regardless of Senators’ indifference to facts, more inquiries, more reporting and revelations. It matters that Brett Kavanaugh showed exactly who he is.

What matters most is how the powerful rage shown by so many women, and by decent people in general, remain focused. It’s not really about Democrats’ rhetoric about impeaching Kavanaugh or Trump if they take over Congress. That’s a hail-Mary diversion. The main thing for today’s struggle is not to “preserve the legitimacy” of the Supreme Court, but precisely to discredit this institution as it returns in its majority to what it’s largely been historically, a safeguard of the privileges of the rich, the powerful and the oppressors, from 19th Century slave owners to today’s corporate brigands.

Where the Court has departed from that posture, it’s mainly been a response to pressure from popular. movements —notably insurgent labor, civil rights, women. That holds true now. It’s been the numbers and the passion shown by the movement that put some spine into the Democrats, pushed the American Bar Association to reverse its endorsement, and above all forced the exposure of Kavanaugh’s record that he correctly stated will permanently follow him, and the Court.

That’s no trivial matter – it will put some constraints on how far Chief Justice Roberts and the reactionary majority feel they can go. When and if this Court majority does abolish abortion rights, wipe out DACA or Temporary Protected Status and enable mass voter suppression, these and other atrocities must be met with contempt, defiance and the threat of direct resistance.

It’s true that following the knife war over the Supreme Court, attention is focusing on the midterm elections, which will take place after this issue of Against the Current is published but around the time it reaches our subscribers. At this writing, we don’t know the outcome of the possible Democratic “blue wave” in Congressional, Senate and various state races. One thing we do know is that if Hillary Clinton had won in 2016, we’d now be talking about two years of a stagnant neoliberal presidency and prospects for a Republican “red wave” taking a stranglehold on both houses of Congress.

Be that as it may, while the Republican Party has become a far-right coalition dominated by billionaire interests, racism and Christian fundamentalism, an important development has emerged — as an outgrowth of the Bernie Sanders campaign and an expression of the anti-Trump resistance – in and around the Democratic Party.

A layer of progressive and democratic socialist candidates, including a growing number of women and people of color, is coming forward to contest the entrenched corporate-neoliberal party establishment. The New York City primary victories of Julia Salazar and Alexandria Ocasio-Cortez, both members of Democratic Socialists of America (DSA), are examples.

Insofar as such matters are predictable, it seems likely that there will be a double polarization of politics – between the Trump gangster regime with his Republican enablers and the broad social “resistance,” and at the same time between the corporate Democratic establishment and the progressive and democratic socialist wing that’s gaining credibility and showing increased dynamism.

We have no way of knowing now what might be the result of the swirling scandals around Trump and his extended racketeering crime family – or what kind of Republican free-for-all might ensue in case he goes down. On the Democratic side, there’s a desire within the U.S. capitalist class for a “moderate” and above all safely corporate alternative to both Trump and the “dangerous” progressive left (even, if the Democratic leadership itself can’t generate such an establishment candidate, potentially someone like billionaire Michael Bloomberg).

Surrender, Accommodation or Rupture?
Whether a polarization in the Democratic Party might result in a progressive surrender to the establishment wing in the name of “party unity,” an accommodation that might be brokered around a figure like Elizabeth Warren who straddles both wings, or a serious rupture, can’t be known at this point. We know for sure that the neoliberal forces of the Democratic “center” have no intention of giving up their control.

The inevitable strains became visible when, for example, Ocasio-Cortez announced her support for the far-from-progressive Governor Andrew Cuomo’s reelection and for all Democrats of any political stripe. That’s entirely consistent with her party affiliation, but not with the stance of New York City DSA which issued a statement differentiating their position from hers. That kind of contradiction will not be an isolated case.

Indeed there will be a growing cohort of progressive and some open “democratic socialist” representatives in Congress. There can be a niche for them inside the Democratic Party. They may be given a role in writing that most meaningless of documents, the Democratic party platform. None of that will change the core of the Democratic Party’s agenda, going back to the Bill Clinton era – with its record of banking deregulation, destruction of welfare, “tough-on-crime” legislation that brought on the current era of mass incarceration – and its support of numerous imperialist wars and interventions.

The pathway to independent progressive or working class politics in the United States has proven to be torturous, long and among the thorniest problems that the left has confronted. There are multiple well-documented factors behind this – the massive power of the winner-take-all presidency in the absence of a parliamentary system, the obstacles to voting that keep participation low in comparison to most countries, the sheer weight of corporate power and money in politics, the low level of unionization and the dependence of public sector workers on state policies—and the crippling role of white racism that keeps the working class from acting in unity.

These problems, and many more, persist. One very positive change today, as we noted in our previous editorial statement [1], is that the discussion today involves a vital new layer of thousands or even tens of thousands of socialist activists.

We don’t pretend that today’s still-small socialist movement alone can solve the problem of independent politics, especially in the absence of a powerful labor upsurge. But the discussion itself is important both for the openings that exist for electoral campaigns today and to prepare for bigger events to come in a growing social and political crisis. A less reactionary Congress, real voting rights reform, a $15 minimum wage are all good things – but the essential goal must be a radically democratic, egalitarian, feminist and ecosocialist alternative to capitalist madness.

Options: Reply•Quote
Re: Chelsea Clinton made $9 million while serving as a board member for the IAC/InterActiveCorp since 2011
Posted by: Donnie Trump ()
Date: March 25, 2020 09:14PM
Old fuckers posting on here: Will you die for him?
Attachments: