Welcome to Fairfax Underground, a project site designed to improve communication among residents of Fairfax County, VA. Feel free to post anything Northern Virginia residents would find interesting.
Goto Topic: Previous•Next
Go to: Forum List•Back to Forum•Post New Topic•Search•Log In•Print View
the Grass war: Home Depot stops selling straw
Posted by: your lawn ()
Date: October 05, 2019 03:17PM
I've tried Scott's advice to use soil on new grass seed instead of hay: many times many different areas. It did not improve things much: I had a lawn area full of empties (which btw get filled in with weeds). I used 3x as much seed as Scott's said so that wasn't it. I'll now have to use a ton more seed to fill in what was missed using "over-seeding" which totally sucks.

(lawn soil results: ok coverage only if everything is perfect and 1/2 likely to fail: over all a total pain in the ass and little assurance, guaranteed to fail in difficult areas and need repeated attempts)

HD used to charge $75 for a bail of hay before they stopped selling it. Now they only sell pine needles which isn't even useful. They only sell lawn soil**

(straw results: worked excellent wherever i put down a complete layer of hay and seed: with little soil preparation work done - which counts for something)

also: all articles i know of even a Scott's associate say: once seed hit's soil it's germination begins and if not germinated dies (then why does scoots sell seed premixed with soil???? how does THAT work???)

IT'S VERY TEMPTING TO LOOK AT SCOTTS AND HD AND ASSUME COVERING NEW SEED WITH SOIL IS LEGIT. also: you'd be attracted by that lawn soil costs $2-$7 a bag (way cheaper than HD straw which is $75/bail)

"You can get poor quickly trying to save money!"

MY ADVICE for ffu: don't try to save money, use Straw. you want and need the see you planted to grow. (you have to put down 3x-5x what is recommended for a good cover: seed gets expensive), paying the extra for the straw I fully suggest.

Next Question: Why did HD stop selling straw nation wide? You can be assured farmers didn't stop growing it! 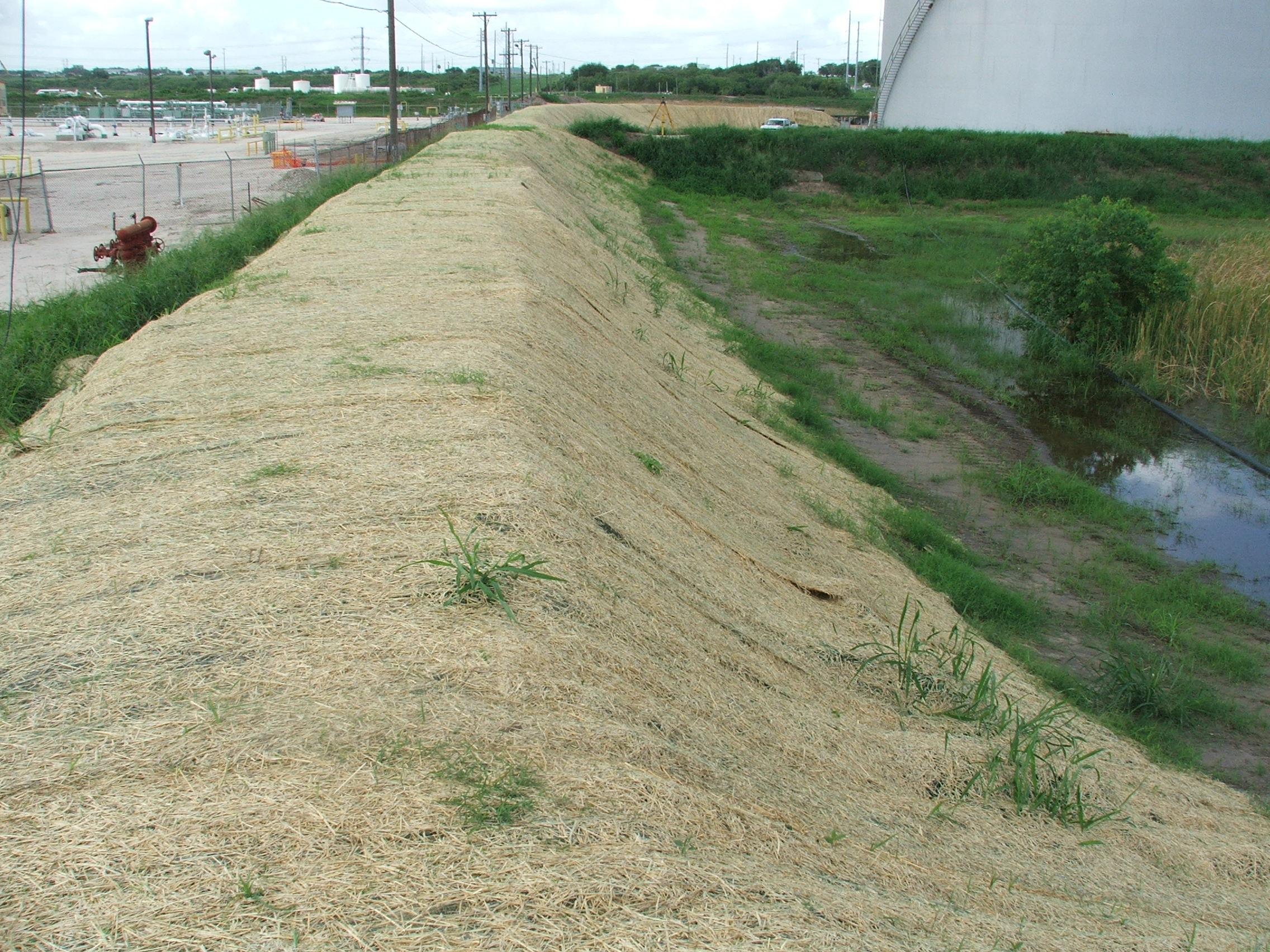 Straw has been a favorite of highway and building contractors - who hasn't seen areas of hay spread while driving down the highway? Home Depot stopped selling it nation wide. Home Depot is run/managed by Californians. They also stopped selling 2.25" clamps for drying hoses selling only 2" (which only fits on NEW installations, strong arm you into buying all new hose/piping)

it's all about "no noxious wees" (see label, noxious are infamously hard to get rid of), and germination rate

Do NOT do the above: if you can see soil easily you didn't spread it well enough and will get a %50 rate wherever you can see soil: it will be a big problem later, wasted seed, etc. you'll loose big if you cheat on straw or seed, so do only what you can afford to get done right.

You can get results like this if you simply don't cheat: put down enough seed and straw. Loosen soil a little first with pitch fork if not soft enough to push finger into. Put down new grass fertilizer a week ahead (water that if need be). Do the straw & seed. Water correctly the first (a few days up to a week) (then sparingly after a couple weeks optional)

They key is not to cheat, it's rather easy to get excellent results otherwise.

If you do it the homedepot way with poor seed and no straw: you'd think it was all about luck or requires expertise. It isn't it doesn't.
Options: Reply•Quote
Re: the Grass war: Home Depot stops selling straw
Posted by: r34rgtgre ()
Date: October 05, 2019 03:37PM 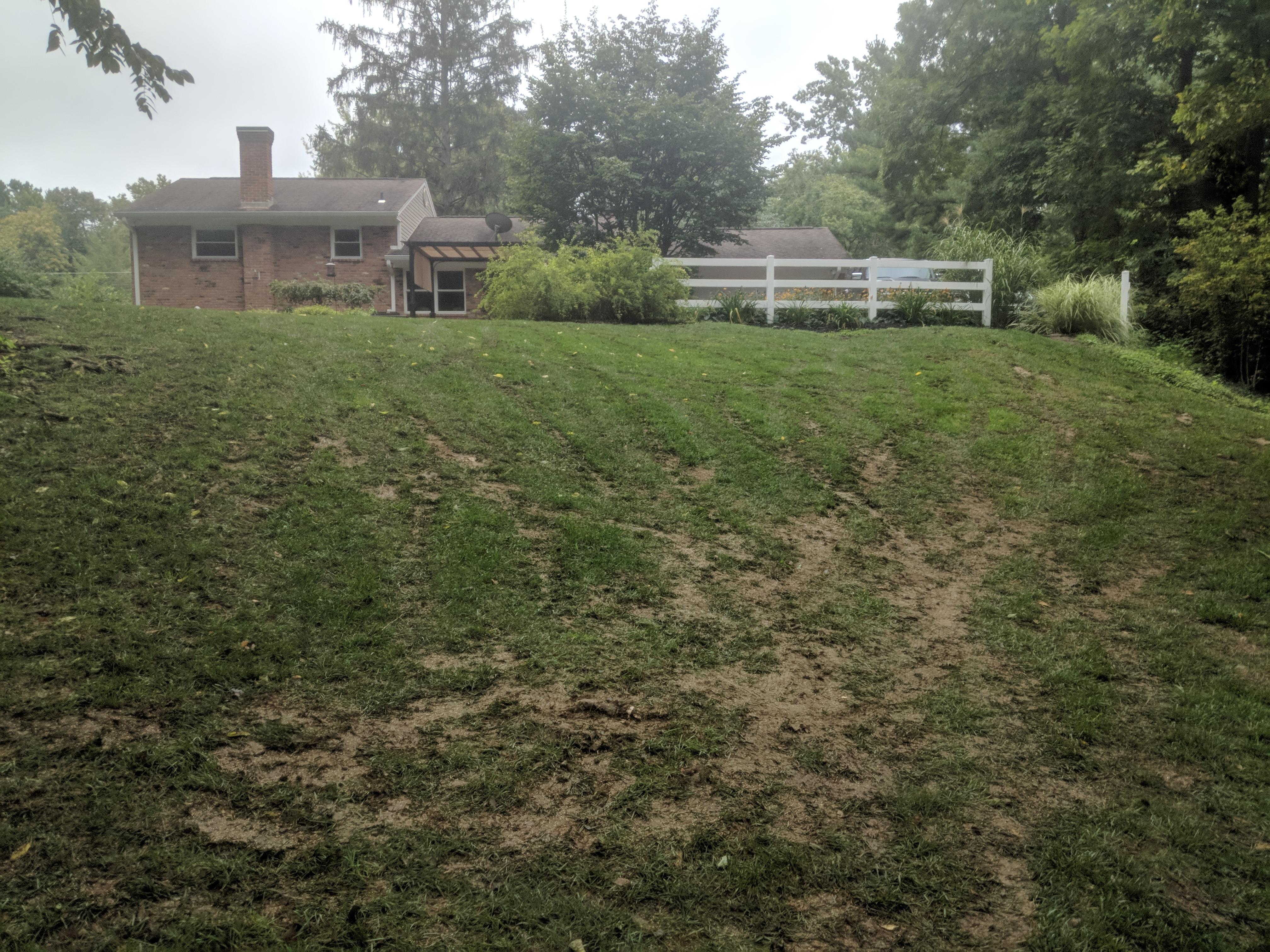 Getting this? It may be where lawn tractors turn around: those commercial mowers are HEAVY and are WORSE on grass than foot traffic (keep off the grass) where ever they turn around or also on hills.

You'll be paying your "lawn contractor" to fix problems they create - and they like turning in your neighbors property to avoid your pointing a finger at them. i tried it once: it doesn't work as advertised and i later found out it is recycled radiator fluid from china - which is poisonous to the environment (banned in usa - but california is a buncha liars)